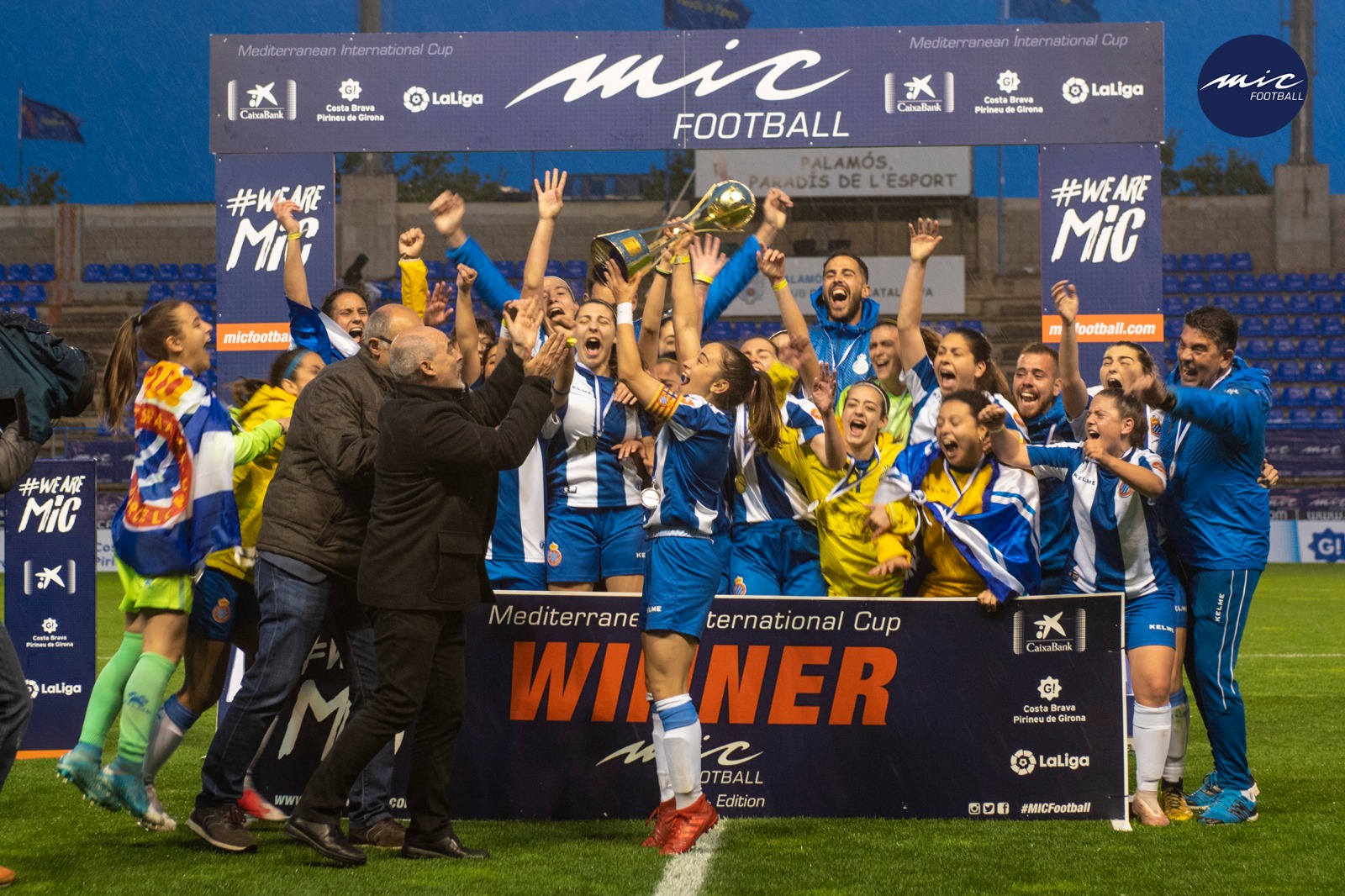 This Saturday afternoon, Palamós Costa Brava Stadium has been the scenario for the first finals of the 19th edition of youth football tournament MIC-Mediterranean International Cup, which has been won by RCD Espanyol in CAT. E – U12 and CAT. – U19 categories; and FC Barcelona in CAT. D – U12 category. More than 3.000 spectators have come to the stadium. Patrick Kluivert, who did not want to lose the magnificent actuation of his son, Shane Patrick (U12 FC Barcelona player). The six MICFootball finals left of the categories U19 and U13 will take place tomorrow in Palamós and Figueres.

The first award of the afternoon has been achieved by RCD Espanyol, who has overcome the FC Barcelona with a final result of 1-3 in the great final of the U12 category. RCD Espanyol team, coached by Marc Pascual, has achieved the victory against FC Barcelona in a great final match with a resut of 1-3. The goals have been scored by Jan Pereis and Nahum Bardolet, during the first half-time and Àlex Bombardo, during the second one. They had already knocked out Real Madrid CF during the semifinals (3-3; 2-0 on penalty round), el Barcelona Soccer School Panamà during quarters (8-0), FC Hapoel Kfar Saba from Israel in 1/8 (7-0) and JFL Taschkent, from Uzbekistan in 1/16 (18-0).

Guillem Victor and Gerard Valdevia have scored the goals for FC Barcelona’s team, coached by Jordi Pérez, which got into the final after knocking out Real Betis Balompié in the semifinals (2-2, 3-2 on penalty round), Olympique Lyonnais form France during quarters (5-0), Can Rull Romulo Tronchoni in the 1/8 (6-0) and finally, U.E. Llagostera in 1/16 (5-1).

FC Barcelona has crowned himself king of the category after defeating Valencia CF with a result of 2-0 thanks to the goals from David Sáez i Shane Patrick Kluivert during the second half-time. Barcelona, coached by Marc Serra, have made their way to the finals

after knocking off Manchester United in the semifinals (4-0), De Anza Forze form North America during quarters (6-0), and Vic Riuprimer in 1/8 (4-0). On the other hand, Valencia CF, coached by Pablo Seral, took over Athletic Club during the semifinals (0-0, 3-2 on penalty round), Total Futbol Academy from United States, during quarters (1-0) and Fundació Unió Esportiva Olot in 1/8 (6-0).

RCD Espanyol has achieved its second title this afternoon in U19 Category after defeating Valencia CF in a long penalty round. After the match ended in draw, with Claudia Riumalló scoring for the Catalans and Paula Ortiz for the valencians, Óscar Corbacho’ squad has claimed the trophy thanks to the last save in the shoot-out of Aina Pagespetit. On the road to the final RCD Espanyol, whom are the successors of PSG, won Fontsanta-Fatjó (0-1) and B1 Soccer Adademy (4-0). On the Group Stage they dominated against Talents Academy (4-2), the Andorran selection (0-3) and the CE Pontenc (9-0).

The ches, managed by Manolo Sampedro, has lost in their 3rd penalty shoot-out in a row, after winning against both of the Futfem Talents Academy teams (3-3 I 0-0).

The other finals, tomorrow in Palamós and Figueres