FC Barcelona closed their participation in MICFootball 2022 with a triplet, winning the the U12A, U14 and U16 categories. The azulgrana team has now a total of 19 titles throughout the tournament’s history.

Barça won two of the three finals on penalties, while in the U12A they lifted the title by the minimum with a solitary goal from Alejandro Oviedo.

U16: Victory on penalties against Granollers

Barcelona was proclaimed champion of the U16 cadet category after beating EC Granollers on penalties, in a duel that had ended 0-0. The Blaugrana, who started as favorites and have defended the title, could only beat from the fateful point a rival with whom they share the league in the Cadet Honor Division. The boys led by Ivan Carrasco and Hèctor Ortega had obtained the ticket for the final after winning the derby against RCD Espanyol (4-2). Previously, they had overcome five other rivals with a clean sheet: CP Sarrià (3-0), SSD Ausonia (5-0), Gironès-Sàbat (2-0), Racing Sarrià (2-0) and BCN Sports Academy B (5-0).

Barça needed a penalty shootout to defeat a well-positioned Atlético de Madrid. After finishing the game 0-0, the Blaugrana were more successful from the fateful point (3-4) and added the sixth title in this category. David Sánchez and Pere Oliver’s boys starred in an immaculate tournament without conceding any goals and winning the previous 7 games. However, the road was not easy, with hard-fought victories in the semi-finals and quarter-finals against Sabadell (2-0) and CE Manresa (1-0). Previously, they beat the Evolution Team (10-0), CP Sarrià (17-0), Penya Blaugrana Sant Cugat (17-0) and CF Sant Feliu de Guíxols (0-5).

U12: Alejandro Oviedo decided the final

After winning the League a week ago, the generation of 2010 won the title in the youth football-11 category (U12 A) after getting rid of Club Atlético de Madrid (0-1) at Palamós. The boys led by Jordi Pérez and Cristian López, very solid during the tournament, beat the Colchoneros with a solitary and early goal from Alejandro Oviedo. 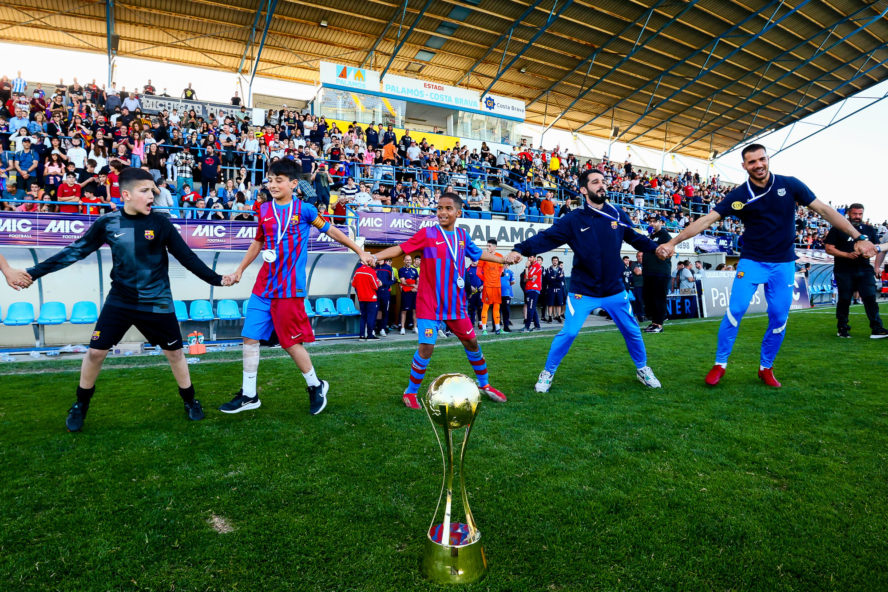